How to pitch (and get a yes)

I made the mistake recently of counting the number of years I have worked as a magazine editor (coming up to 28 years now). In that time, I realised I could count on one hand the number of really great story pitches I’ve received from freelance writers.

I don’t blame anyone for that. No-one ever teaches you how to pitch, and editors rarely have the time to give you feedback.

But I can tell you how powerful the joy of getting a great pitch is. When you get one, not only do you commission (or plan to commission) straight away. You will frequently find more work for that writer from your own pool of ideas, because you think, ‘This person gets what we’re doing’.

So I thought I’d compile a list of do’s and don’ts for pitching to editors. Mainly because it’s in my interests as an editor to get great story pitches—it saves me from having to generate ideas. And I’m naturally lazy.

I’ll add a proviso: this list may not work with every editor. I can’t speak for every editor. But I can say this list isn’t based on my personal beliefs or preferences. It’s based on the editing and publishing process and is designed to align what you do with what I do—which should make my life easier and get more work for you.

When you choose a publication or website you want to write for:

DO research the audience

Most publications will explicitly spell out who they see their audience to be. But if you’re still unsure, look up their website and see if you can find a media kit (which will spell out who that audience is for advertisers). Don’t waste space in your pitch talking about yourself—pitch a story with an angle that has some benefit to the audience.

Competitor publications will give you an insight into how original your story is. Editors like to believe their publication is unique, and if your story idea is the same as a competitor’s they will be unimpressed—even if, at first glance, it seems perfect for their audience. If you are going to pitch an idea that is similar to something in a competitor title, make sure you explicitly spell out how your idea is better, more relevant, and perfect for this audience.

A freelance writer will be judged on a case-by-case basis on the quality of their pitch. Not their CV. All editors have commissioned well known, highly experienced writers who have filed crap copy. They know it’s more of a risk to commission based on experience rather than the story idea itself. Similarly, just connecting on Linkedin means nothing. It’s nice and all, and I’ll happily be your Linkedin friend, but I never go there looking for writers. To be honest, I hardly ever go there at all.

DO pitch to the sections

Pretty much every website and magazine is divided into sections. It helps readers navigate their way through, and helps advertisers locate an appropriate editorial environment to place their ads in. If you pitch ideas that fit into the sections that are already there, the editor can quickly see if it’s appropriate or not.

Virtually no-one ever does this. And I don’t know why. Even among freelancers who are really good at pitching, I can’t recall anyone, ever pitching a Q&A, or a listicle, or an infographic, or comparison pieces, or sketches, or for-and-against debates, or case studies. Different story formats break up the ‘wall of grey text’ in a publication (or on a website) which helps editors create novelty and variety—two of the four pre-conditions for attention and engagement.

Seriously. People do this. The editor thinks the idea is great, commissions and schedules it, and three weeks later gets a call saying “Sorry, there isn’t a story there after all”. Or I go to chase the story and just get ghosted. It doesn’t just piss the editor off—it doubles their workload because they have to find a replacement. So they are unlikely to want to work with you again if you do this.

The hook of your pitch is how it helps the audience. The hook (or lede) of your story is a structural technique for reader engagement. Your editor doesn’t need to see your lede in the pitch—just how this piece will benefit their readers. Focusing on the latter will help keep your pitch succinct. By the way, ‘lede’ was always spelled that way because ‘lead’, which would be correct, was also the thin strip of metal in a Linotype machine—journos created the jargon so the two wouldn’t get confused. Small bit of editorial trivia for you there.

DO pitch ideas in bulk

Pitch one idea and the only answer you can get is yes or no. Pitch five and you’ve got a much better chance of at least one of them being picked up. Pitch ten and you’d be really unlucky to get ten misses. But also, pitching multiple ideas shows you’re thinking about the audience and the problems they have, or the knowledge they want to get. That in itself gets you extra marks with an editor, who may be willing to work with you to refine a few of those ideas.

DON’T just ring up for a chat

I love hanging out with writers. They are often hilarious, indiscreet, fun to get drunk with, intellectually curious, and just great all-round people. But in the context of the rest of my working day, I don’t get a lot of time for chatting. There’s absolutely nothing wrong with having a social/professional relationship with an editor, and I’m thrilled that I have that relationship with some of my writers. But it’s not possible every day. If you’re going to call, make it for a reason, get the answer you’re after, and save up the chatting for when we get together later.

Every day, I will get calls or emails from some or all of the following: SEO’s who want to optimise sites I know are already optimised; digital agencies wanting to place freebie content for their clients; PRs flogging product; advertisers who believe they’re owed editorial because they bought an ad; readers who want to complain about the stock picture used on page 36; lawyers who want to a retraction; clients who need meeting; sales people who need a meeting; designers who need a meeting … and I’ll happily take those calls (because that’s part of the job) while also generating story ideas, copy-editing raw copy, writing headlines, writing captions, proofreading the next edition, double-checking the PDFs, and strategically planning for the mid-to-long term future of my publications.

Also, I (and many other editors) will commission in cycles. It’s not fair on writers to commission something you can’t use for five months—many magazines have a three-month lead, so I don’t even start with the commissioning until that point. Your idea might be great, but you may have pitched it three days after I commissioned the October issue. In which case, it goes into a file to be looked at next month.

If you’re going to take anything away from this (and it turned out longer than I expected), it’s this: pitch stories for an audience. The audience is who the editor cares about. The audience are the ones who benefit from the story. They are your key to a successful pitch.

What’s your favourite tip when it comes to pitching editors? We’d love to hear from you in the comments. And if you think Rob Johnson looks familiar – well, he recently helmed a mini masterclass for us on the secrets of getting consistent content marketing work – check that out here. 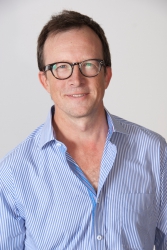 Find Rob
Rob Johnson
Rob has worked as a journalist and/or editor on a wide variety of publications. He's written for Rolling Stone and Who Weekly, before becoming one of the founding editors of youth culture magazine Juice. He has also worked on Good Weekend, The Sydney Morning Herald and The Age as a feature writer, and as a senior journalist on business-to-business title AdNews. Rob has worked in content marketing since 1998, writing and editing magazines for the Australia Council, Air New Zealand, Ansett, BMW, Subaru, Westpac, the Restaurant & Catering Association, The NSW Department of Education, and many more.
In 2004, Rob teamed up with Mark Brown to create Engage Media, a boutique agency which publishes its own B2B magazines in the dental and veterinary space, and creates magazines, apps and digital content for other businesses.